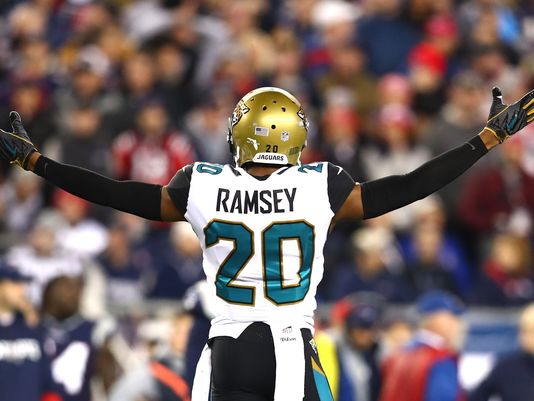 The argument for “best cornerback in the NFL” has changed over the past few seasons. Darrell Revis was the best for a long time; nobody threw the ball to “Revis Island”. Then Richard Sherman held the title before Arizona Cardinals cornerback Patrick Peterson seemed to take hold. Since then Chris Harris Jr. and Casey Hayward have posted the best grades by Pro Football Focus, and now Jalen Ramsey of the Jacksonville Jaguars has jumped into the conversation. He’s tough, physical and not afraid to talk about his game, or other players. In a recent article, Ramsey provided his take on many quarterbacks in the league. Although he is young, a player of his talent providing analysis on quarterbacks is extremely valuable to the NFL fan.

One of the first topics discussed was Ramsey’s problems with the 2018 NFL Draft. From his take, the quarterbacks were drafted out of order. Baker Mayfield was very comparable to Lamar Jackson and Baker went number one to the Cleveland Browns. From that stance, Lamar should have been the second taken since other teams wanted Mayfield. At the same time, there is no guarantee that the New York Jets or Cardinals or Buffalo Bills wanted a scrambling quarterback. However, Ramsey’s opinion on the Bills pick, Josh Allen, are extremely valid. Against Power Five conference schools, Allen threw five interceptions against Nebraska in 2016, threw two more and only 174 yards against Iowa in 2017, and managed a pitiful 64 yards and completion percentage of 37.5%, with another interception in a home game versus Oregon. There was little reason to take Allen over Lamar Jackson and even less reason to take him over Josh Rosen of UCLA. Ramsey predicts Allen will be a bust, and one can only agree with his logic.

Moving back to Lamar Jackson, Ramsey thinks “He’s gonna do a good job.” The coaching of the Baltimore Ravens is very good and there is a winning environment there. Jackson’s talent running and throwing the ball should flourish. Baker Mayfield and Lamar Jackson get yay votes from Ramsey, but a big nay for Josh Allen.

Two quarterbacks that received negative grades from Ramsey came from the same draft, in 2008. Matt Ryan of the Atlanta Falcons is overrated and Lamar Jackson’s teammate Joe Flacco sucks. Again, Ramsey is pretty spot on here. Matty Ice was a good franchise quarterback and still is. A guy that can give about 4,000 yards passing and 25 touchdowns. However, he will make mistakes within a game, he needs a good defense and he needs his weapons. We have not seen Matt Ryan play without top wide receivers very often.

Ryan recently achieved the overrated label after winning MVP in a year where the Falcon’s offensive coordinator at the time, Kyle Shanahan, should have been the first assistant coach to win Coach of the Year. The Falcons posted record breaking offensive numbers and were a fourth quarter away from winning the Super Bowl. However, we know how that ended up. When Shanahan left to become the head coach of the 49ers, Matt Ryan came back to Earth. There will not be another MVP for Ryan. As for Flacco, it is pretty clear he isn’t good. After he won a Super Bowl, he received a massive paycheck for his excellent postseason and we never saw that Flacco again.

Ramsey has respect for Odell Beckham Jr., but as for the quarterback, Eli Manning, the only reason Manning puts up the numbers that he does is from the play of Odell. Over the last three seasons, Manning has thrown for 66 touchdowns and 29 interceptions with a completion percentage of 63.3% and a quarterback rating of 91.5, but that’s when Odell is playing. When Beckham Jr. is sidelined, Manning’s touchdown to interception numbers are 14 and 14, his yards per attempt drop from 7.0 to 6.0 and his rating falls to 75.0. Even his sack percentage jumps from 3.8% to 5.2%. The weapon might make Manning, not the other way around.

There were two more quarterback to wide receiver connections. The credit for the production goes to the wide receivers between Andrew Luck and T.Y. Hilton and Ben Roethlisberger with Antonio Brown. Ramsey doesn’t think Luck is good Big Ben is “decent”. Respectfully, there has to be somewhere Ramsey messes up his analysis. It’s can’t be a division rival thing because Ramsey has respect for Houston Texans quarterback Deshaun Watson. In this case, Ramsey is just flat out wrong about Andrew Luck. 3 consecutive 11-5 seasons, 86 touchdown passes, one of them a 40 touchdown season, and an AFC Championship appearance says different. That is the production Andrew Luck provided when he was healthy and that was with arguably the worst supporting cast in the league. Ben Roethlisberger has been a consistently great quarterback and this was before Antonio Brown as well. He also has two Super Bowl rings in three appearances. He is the toughest quarterback in the league and his arm hasn’t shown too much regression yet.

Ramsey was also asked about Ryan Tannehill, the Miami Dolphins quarterback and he stated that he hasn’t heard good things about him, and doesn’t watch their games. Unfortunately for the Dolphins, no there aren’t good things to say about Tannehill and no, nobody watches their games either.

There are definitely some average quarterbacks in the league that can make some noise when the supporting cast is right. Marcus Mariota and Tyrod Taylor manage the game well and if they have good defenses, then “that’s all you really need.” Tyrod doesn’t turn the ball over much, with six interceptions as the most he’s thrown in a season. Mariota is young and has had inconsistency with interceptions and fumbles, but he doesn’t manage the game well and had excellent red zone numbers before last year.

Jimmy Garropolo doesn’t have anyone completely sold yet except the 49ers. The Kyle Shanahan offense and schemes could have made Jimmy G look better than he is and that might continue through the rest of his career. Jared Goff is also a player built on schemes. Goff made leaps in his second year but he needed an excellent coaching staff to bring him along. He shouldn’t have been the number one pick in that draft, with Carson Wentz going after him, but Goff is an above average quarterback that could win a Super Bowl someday with the right team and the coaching staff staying intact. Matthew Stafford received similar praise. He’s probably a step above these quarterbacks in this group, but the next tier has better quarterbacks, so it is fine to lump Stafford with the likes of Goff, Taylor and Prescott.

Nick Foles and Blake Bortles are “good enough”. Even through the written article responses, you can tell Ramsey had to make a strong attempt to not throw his team’s quarterback under the bus, with good reason. Bortles is not an impressive quarterback and it is easy to lump him in the same category as Nick Foles. To accomplish what they have so far, they need a ridiculously stacked team.

The Pretty Good…and the Good

Kirk Cousins received high praise from Ramsey. Labeled as the best quarterback coming off of play action in the league, the stats back up that claim. From the numbers presented by Pro Football Focus, Kirk Cousins has the highest quarterback rating on play action passes with a 124.4 rating. Cousins has put up impressive numbers in a good offense run by Washington Redskins head coach Jay Gruden. Now that he is with the Minnesota Vikings, the personnel around him have improved, most substantially at the running back and wide receiver spots. Cousins might have a career year with his new team.

Derek Carr and Russell Wilson received simple statements, labeled “good” by Ramsey. Both quarterbacks received the second highest praise from the Pro Bowl cornerback so that works. Philip Rivers received one “pretty good statement” as well. Nothing to argue with there, since he should be placed under Carr and Wilson.

Apparently, to Ramsey, the highest praise he can give a quarterback is that they don’t suck. That was the opinion he gave for Aaron Rodgers and Tom Brady, the two unquestionable best quarterbacks in the NFL right now. To be fair, the interviewer phrased the question in that manner.

The most decorated praise he gave was to veteran Drew Brees, and youngsters Deshaun Watson and Carson Wentz. Drew Brees has been running the show in New Orleans since he was replaced by the Chargers with Philip Rivers. Since then, Brees has over 58,000 passing yards with 408 touchdowns and Super Bowl win over another Hall of Fame quarterback. He has done that in 12 seasons. To compare, the quarterback that held all of the passing records, before names like Favre and Manning showed up, Dan Marino, compiled 61,361 yards and 420 touchdowns in his career of 16 seasons.

Finally, Ramsey sees two future MVP winners in Wentz and Watson. Ramsey’s praise for the Watson is unbelievable considering they are division rivals, but he had no problem letting the public know that Watson is the real deal. Watson went on a six game tear where he threw 19 touchdowns and averaged close to 300 yards per game. Carson Wentz had a breakout season in his second year and took a mighty leap over the other young quarterbacks that are making their way in this league. Unfortunately, both of these quarterbacks suffered ACL tears and will be fighting hard to get back to the level they were at before, and continuing their progression after healing.

Jalen Ramsey has strong opinions, and some weak opinions as well. He’s not a coach or analyst but he does watch more NFL tape than the average person and has earned a right to speak on the abilities of others in this league. It will be interesting to see who proves him right, and who proves him wrong. An updated interview in five years would do justice to all.