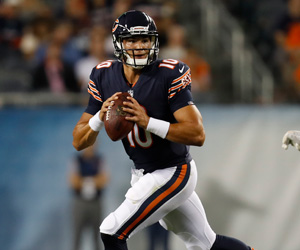 The Windy City has never been home to an outstanding quarterback. Jim McMahon was tough but nothing special and Sid Luckman played before throwing was a regular part of a playbook. Teams probably didn’t even have playbooks at that time. Jay Cutler, Kyle Orton and Rex Grossman round out the top quarterbacks of the 21st century for the Bears. It would be a waste of time to pull up their numbers just to prove how invaluable they were.

The Chicago Bears finally went all in on the quarterback they felt gave them the best chance to succeed in the future. Mitchell Trubisky didn’t have an easy rookie season, which was largely due to the team around him, the coaching, and his own inexperience at the position. The Bears have made moves to fix the first two issues, and now the direction of the franchise falls on the shoulders of the 2nd pick of the 2017 NFL Draft.

The Chicago Bears Are Following the Philadelphia Eagles Blueprint

Last year, during free agency, the Philadelphia Eagles made a franchise shifting move by signing wide receiver Alshon Jeffrey from the Chicago Bears. Jeffrey was asking for money the Bears did not want to shell out to the often injured wideout. The Eagles signed Jeffrey to a one year $14 million contract to prove his worth. The talented player fit immediately with second year quarterback Carson Wentz, who was drafted number two overall in the 2016 NFL Draft. This was an underrated move at the time and it helped Carson Wentz make the jump from Rookie of the Year candidate to MVP candidate in one offseason.

Mitchell Trubisky won’t make the jump that Wentz did, because Trubisky is not as experienced nor as talented. However, the Bears signing wide receiver Allen Robinson is a fantastic move. In 2015, Robinson caught 80 passes for 1400 yards and 14 touchdowns. The next year didn’t work out well, because of the dreadful quarterback play from Blake Bortles. Although Bortles didn’t have terrible numbers, he added 10 touchdowns and 5 interceptions in the fourth quarters of that season in which his team went 3-13. Those are red flags for garbage time stat padding. Robinson didn’t get a chance to be a part of the Jaguars resurgence in 2017 when they made the playoffs for the first time since 2007 due to injury. Now that he is with the Bears, he has a chance to speed along Trubisky’s growth.

The Bears also signed a fast target in Taylor Gabriel. This wide receiver has made his mark as a deep threat and quick weapon in the screen game. The tight ends available to Trubisky are piling up with the addition of Trey Burton from the Eagles. Zach Miller and Adam Shaheen already occupied a strong tight end corps. The combination of big targets and speed gives Trubisky several options to work with.

Power and speed has also been applied to the backfield between running backs Jordan Howard and Tarik Cohen. The two backs worked really well as a thunder and lightning duo. Howard’s yard per attempt rate did drop from 5.2 in his rookie year to 4.1 YPA. However, injuries did play a factor in that. Howard was banged up all year, and there was no passing threat to take the pressure off of him and Cohen. The rookie running back Cohen became a fan favorite very quickly for his toughness and big play potential. With Howard wearing down opposing defenses with his strength and Trubisky’s improved passing, “The Human Joystick” will have more opportunities to make game changing plays.

Strong defense has been a mainstay in Bears culture, and when that side of the ball reached it’s lowest point in 2015, the Chicago Bears went after one of the better defensive coordinators in the league Vic Fangio. The former San Francisco 49ers defensive coordinator led them to finish tenth in total yards, seventh in passing yards, and ninth in points allowed. This was done despite the many injuries suffered to the defense this past season. Starting linebacker Jerrell Freeman and safety Quentin Demps were lost to injured reserve within the first three weeks of the season. Outside linebackers Willie Young and Leonard Floyd also experienced injuries that ended their seasons early. The secondary remained strong with safeties Eddie Jackson and Adrian Amos stepping up and cornerbacks Kyle Fuller and Prince Amukamara becoming a top duo.

One of the key factors in the Eagles Super Bowl run was their defense, particularly the front seven. Putting pressure on quarterbacks is key and this helps the secondary defend the pass tremendously. Also, Carson Wentz didn’t have any worries about his team’s defense or needing to keep up with opposing team’s scoring. The same should hold true for Trubisky. With a strong defense backing him up, Trubisky can focus on running the game plan and the pressure on him to score isn’t as intense.

Since the Eagles were so successful being active in free agency, other teams are following suit to improve their franchises. The key is making the right moves that benefit the team, instead of the splashiest moves that generate excitement for the fans. Signing the best player on the market isn’t always the best move. It’s only the right move if the player fits with the team and continues to stay motivated after being paid. The Bears have built a solid core through the draft and topped it off with free agent necessities. They still have a top 10 draft pick that they can use to land more draft picks or land a top prospect to fill one of their holes.

In the end though, this falls on the growth and maturation of Mitchell Trubisky. The Eagles had built an excellent team with a dominant defensive line, powerful offensive line, and adding offensive weapons. The results of the moves they made rested on Carson Wentz’s improvements, and took care of any doubt about what he can do on the field. Trubisky has his own mountain to climb, but the Bears have completed the transactions necessary to form Trubisky into the first franchise quarterback of their team history.