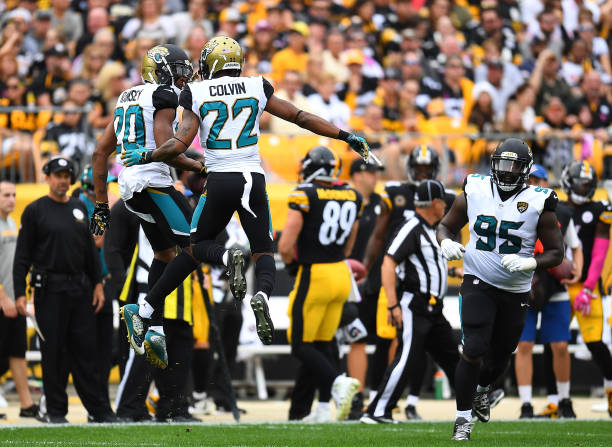 In week five the Jacksonville Jaguars strolled into Pittsburgh and unceremoniously decimated the Steelers. Ben Roethlisberger’s five interception performance left the future Hall of Famer alone with the darkest of thoughts for an elite Quarterback; “Maybe I don’t have it anymore”.

Whilst the Steelers have since found their groove on offense, Pittsburgh’s roster has unfortunately been weakened by a number of injuries going into the post-season. Most notably those to sidelined linebacker Ryan Shazier (spinal damage), and recovering receiver Antonio Brown (torn calf) – who was also sent home early from practice on Friday after coming down with an illness. So whilst the Jaguars may have more to fear than they did in October, that doesn’t mean Sunday’s result is a foregone conclusion.

The Jacksonville Jaguars are Poised to Sweep the Pittsburgh Steelers

No team has beaten Pittsburgh twice at Heinz field in the same season for over a decade, however, the last team to achieve the feat was the Duval County natives. Although this Jaguars team has leaps and bounds to go on offense before they can establish themselves as a perennial playoff threat, they do boast one of the stingiest defenses in the league, and the NFL’s leading rushing attack.

The Jaguars averaged a league best 141 yards rushing per game during the regular season, something which Mike Tomlin will be well aware of after duo Leonard Fournette and Chris Ivory totalled over 220 yards between them when these two teams last met.

Jacksonville have struggled to move the ball effectively heading into the playoffs, with their rookie running back Fournette failing to break 70 yards in five of his last six games. He, along with offensive coordinator Nathaniel Hackett will be hoping for more of his early season production. Which will take the pressure away from enigmatic quarterback Blake Bortles.

Much like in the Jaguars gritty playoff win against the Buffalo Bills last weekend, Bortles threw for less than 100 yards the last time he was in the Steel City, relying heavily on his offensive line and number 27’s hard running style to set the tempo on offense. It would make sense for head coach Doug Maronne to try and establish the running game early on in this game in order to make sure the Jaguars move down field – and most importantly, take care of the football.

For my money, there isn’t a more star-studded defense left in the playoff picture than Jacksonville’s. Marrone’s defensive unit boasts two premier pass rushers in Calais Campbell and Yannick Ngakoue, Pro Bowl calibre defensive tackles and a linebacker trio as solid as any other in the league. This would be enough to give the Jaguars the upper hand against almost ant offense they face, but this is without mentioning Todd Wash’s party piece, the ‘Jackson Five’.

The Jaguars have the best secondary in football, and it isn’t a subjective opinion. Cornerback duo of Jalen Ramsey and A.J Bouye are two of the top five corners in the NFL, whilst safeties Tashaun Gipson and Barry Church provide good coverage and instinctive play-making ability over the middle. When partnered with an excellent slot corner Aaron Colvin in nickel packages, it is virtually impossible to throw against this team.

There is no doubting that Antonio Brown is one of the best wide receivers of his generation, however question marks over his health may mean that we will see a limited version of himself on Sunday. If the Jaguars are able to focus some of their attention away from Brown and  onto Pittsburgh’s various other offensive weapons, then expect it to be another long day for Tomlin and his ‘Killer B’s’.

Bell has repeatedly established himself as the best dual-threat back in the NFL, whether he is an option out of the backfield or lined up out-wide he has better hands than many professional receivers in the league. Having totalled 95 yards from scrimmage when the teams first matched up in October, linebackers Telvin Smith and Myles Jack need to be well aware of where the NFL’s most used workhorse is throughout the full 60 minutes on Sunday,

The Jaguars have undoubtedly gotten better with their run defense since the addition of Marcel Dareus at mid-season, but still ranked outside the top 20 in rushing yards per game by the end of the season. With an opponent like Bell – who will continue to tote the rock without ever losing a step, harassing this Jaguars front for the full game, it will take a superb effort from the front seven to stop Bell from taking the game out of this superb defense’s hands.

Jacksonville will certainly hope that they are able to take advantage of any misplaced throws from Ben Roethlisberger and turn the tide for this team in order to advance to the final four of the 2017 playoff bracket. A feast which is entirely possible as long as the Jaguars impressive offensive line is able to create holes for Fournette, and allow Bortles to play within himself. No team should ever look past their upcoming opponent, but it is not unreasonable to predict another article outlining how Jacksonville can succeed in Foxborough next weekend.