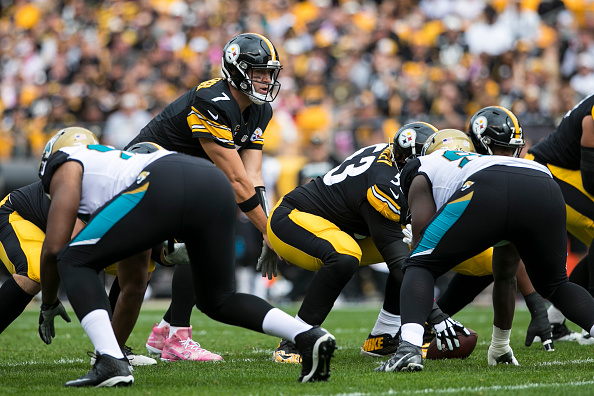 On Sunday the Pittsburgh Steelers and Jacksonville Jaguars will be having a rematch of a Week Five matchup that the Jaguars won 30-9. Don’t expect that this time around.

Why the Steelers Will Beat the Jaguars

In Week 5 of this season the Steelers played their worst football of the season. Ben Roethlisberger threw not one, not two,but five(!) interceptions, with two of them being returned for touchdowns. Le’Veon Bell had 93 yards from scrimmage, that would be good if it hadn’t taken him 25 touches to get there. Antonio Brown was the offenses only sign of life as he hauled in 10 passes for 157 yards. On the defensive end, there had also been better days. The pass defense was fantastic as Blake Bortles was sacked twice and threw an interception.

There was much more to be desired, however, when it came to the rushing defense. As a team, the Jaguars rushed for 231 yards. Leonard Fournette in particular ran all over the Steelers defense to a tune of 181 yards on 28 carries and two scores. To add insult to injury, Fournette’s second touchdown was 90 yards which perfectly summarized the day for the Steelers. The offense couldn’t get anything going, the defense let a rookie running back run all over them, and they just got flat out bullied. Teams don’t usually win games when the other team scores 30.

That Week 5 walloping will not happen again, for a number of reasons. For starters they were both different teams at different points in their seasons. Although at the time the Steelers had the better record (3-1, Jags 2-2) they were not playing their best football. Week 1 they barely squeaked out a win in Cleveland, beat the Vikings, lost to the Bears in overtime, and beat the Ravens. To compare, at that point the Jaguars had beaten the Texans and Ravens and lost to the Titans and Jets. Although at that point the Steelers had won three games and only lost one, they hadn’t looked like the Super Bowl contender that they were expected to be. On the other hand, the Jaguars had established an identity in winning through playing solid defense and running the football.

Now these two teams are at different points than when they first met. The Steelers have now pulled everything together and look like the powerhouse they were predicted to be and the Jaguars are coming off of back-to-back losses to end the regular season and had to fight hard to beat a Bills team that had no business being in the playoffs. The Steelers are a much better team than the Bills in every aspect and if Jacksonville had a tough time with Buffalo, who knows the challenge that Pittsburgh might give them?

In the early season matchup the Steelers turned the ball over five times and allowed 27 points off of those turnovers. Had they not turned the ball over they might have scored more or the score would be 9-3. Without speculating how much the offense would have moved the ball, you take the 27 points from turnovers off of the score and the Steelers win that game 9-3. With the knowledge of the necessity of protecting the football put together with how well Ben Roethlisberger has played since that game, the Steelers have a good chance to win if this upward trend continues.

On the season Roethlisberger has thrown 28 scores and 14 interceptions, but he had not been playing to his caliber until after the Jacksonville game. Through Week 5 Roethlisberger had thrown six touchdowns to seven interceptions. That means from Week 6 until the end of the season throwing 22 touchdowns to only seven picks. With Roethlisberger’s improvement the offense also improved and the Steelers became much more balanced as a team. Balanced enough to play toe to toe with the New England Patriots, who are the favorites to win the AFC every year until further notice. They even brought the game down to the wire without the assistance of Antonio Brown, who injured his calf in the first quarter. If the same Steelers team that played the Jaguars played the Patriots, who knows how lopsided the scoring would have been? One thing’s for certain, if the Steelers had played the Patriots like they played the Jaguars, Jesse James’ catch/no catch would not have been as significant because the Patriots likely would have already put the game out of reach.

The Steelers will win because they are the more complete team at this point in the season. Sure, the Jaguars have one heck of a defense, but their offense isn’t built to win big games like this one, they have one game of playoff experience. The Steelers have a great offense with many weapons, maybe too much for Jacksonville to keep up with, and their defense was very good this year as well. I’m not saying the Steelers are going to obliterate the Jaguars, I’m saying that they’ll win.

Score Prediction: The Steelers pull out an ugly one, but the only stat that matters is the score. 17-6