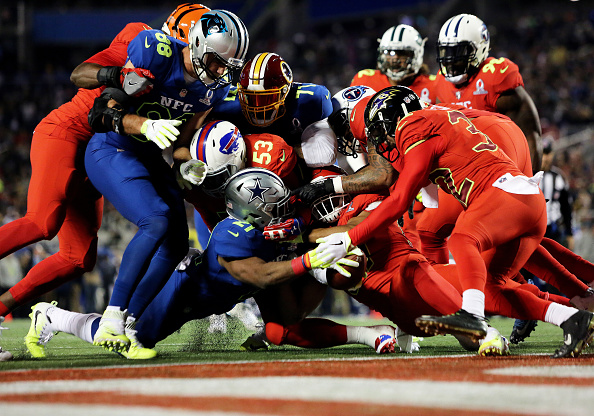 On paper, the idea of an all-star game is amazing. The best players from both conferences facing off in a showcase of the NFL’s elite talent? That would be amazing! However, that’s not what the Pro Bowl is. The Pro Bowl is awful. The fans vote for their favorite players, most of the elite guys don’t even go, and then the game itself is a bore.

The Pro Bowl is Awful

Why isn’t the Pro Bowl good? Well, there are a few big reasons. Firstly, the game is pointless. There’s no prestige so players don’t feel like it’s a big honor to go, and it’s not like there’s a significant prize for the winning team. Participants get paid, and the winners even make a little more money than the losers, but while $30,000 might be a lot for you or me, it’s chump change for the kind of player that routinely makes the Pro Bowl.

And it’s true that being named to the Pro Bowl does have a small say in someone’s Hall of Fame induction, anyone who is in the Hall of Fame conversation probably has greater accolades to their name. So in all honesty, why should a player go? They don’t make a (relatively) significant amount of money for playing in the game, but they still take the risk of suffering a freak injury. So it’s hard to blame the players for not wanting to participate, but even the voting process is silly.

Power to the People

While you are a very knowledgeable, clever, brilliant, attractive, funny, amazing person, not all fans understand football as well as you do! Unfortunately, a ton of fans just vote for the names they know. So players that haven’t been good in years, or just so happen to play on their favorite team, get voted into the Pro Bowl, and will spend the rest of their careers as Pro Bowlers.

Now, that sounds rude. But being completely frank, if anyone can go to the Pro Bowl, regardless of whether they’re truly elite at their position their conference, does going to the Pro Bowl really mean anything? It’s hard to fluke into a MVP award. You have to be really phenomenal, the team has to be playing well, and in all honesty, you have to be a quarterback.

But to make the Pro Bowl? You just have to play on a good team or have relatively adequate stats. Don’t believe me? Here’s a list of a few absolutely undeserving Pro Bowlers.

Andy Dalton of the Cincinnati Bengals has been voted to the Pro Bowl three times. Three times. Have you ever looked at Andy Dalton and thought that he was a bonafide top three quarterback? He’s a long way from the third best quarterback in the AFC. He’s only the third best quarterback in the AFC North because the Cleveland Browns can’t get it together. Thanks to half the NFL deciding they’d rather golf that weekend, Andy Dalton was actually named to the Pro Bowl as a rookie, despite the fact that he only threw for 3,398 yards, 20 touchdowns and 13 interceptions.

When I say Trent Dilfer’s name, what comes to mind? If you said anything other than “worst quarterback to ever win a Super Bowl”, then I’m sorry for including your son on this list, Mrs. Dilfer. But, despite failing to cost the Baltimore Ravens a Super Bowl, Dilfer is a Pro Bowl quarterback. In 1997, someone decided that Dilfer’s 2,555 passing yards, 21 touchdowns, and 11 interceptions were elite numbers, because he got to go to the NFL’s All-Star game.

These are just the obvious ones. The likes of Vince Young, Marcedes Lewis, and Chad Lewis come to mind as well. Plenty of players that just aren’t elite have been voted into the NFL’s All-Star game for dumb reasons. I don’t want to watch an All-Star game with Andy Dalton in it. That’s just dishonest advertising.

Once Upon A Time…

It wasn’t always like this. Once upon a time, the Pro Bowl took place after the Super Bowl, it was in Hawaii, and it featured a plethora of fun skills challenges. Which quarterbacks could throw the ball farther? Who was the NFL’s fastest man? And man, how cool is it to see Peyton Manning throwing touchdowns to Tony Gonzales? It felt like a fun, easy way to end the year.

Now, it takes place between the conference championships and the Super Bowl, none of the players go, and it’s in some city like Orlando. Ratings are at all-time lows, and even the hated Roger Goodell is saying the NFL should consider cancelling the event. If the NFL isn’t going to add a stipulation that rewards the winning conference or the participating players, then it serves no purpose. And with the shadow of the concussion crisis creeping up on the NFL? They’re probably not thrilled about their players taking unnecessary hits.