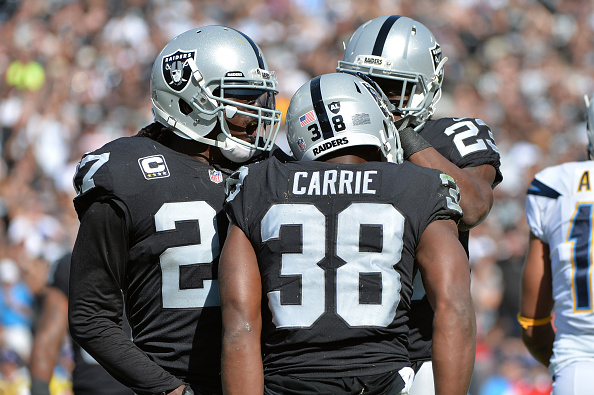 You could write a book about all of the reasons the 2017 Oakland Raiders failed at meeting their goals. Everyone from Derek Carr to Jack Del Rio to Reggie McKenzie played a big part in Oakland’s failures this year, just like they did in Oakland’s successes last year. However, past the offensive struggles and the ineffective defense, there’s one glaring statistic that has made the biggest difference.

In 2016, Oakland’s offense was the sixth best in the NFL. They averaged 373 yards and 26 points per game. Derek Carr was a bonafide MVP candidate, Latavius Murray lived in the end-zone, and it looked like Amari Cooper had fixed his drop problem. In 2017, that same offense is 21st, averages 327 yards and 20 points a game. Carr has really struggled, Murray is in Minnesota, and Cooper leads the NFL in drops, despite having a truly mediocre season.

Interestingly enough, the defense was 26th in the league last year, and they’re 26th again so far this year. Last year, they gave up 24.1 points a game, and this year, they give up 24.7 points per game. They actually give up ten fewer yards per game this year, for what it’s worth. Just like last year, they’re dead last in sacks. They need 11 sacks in the next six games to meet last year’s total of 25. Despite all that, it’s actually another statistic that tells the true story of Oakland’s struggles.

In 2016, the Oakland Raiders forced 30 takeaways. They picked off opposing quarterbacks 16 times and forced 14 fumbles. In fact, Khalil Mack’s six turnovers (five forced fumbles and an interception) helped him win Defensive Player of the Year. Offensively, they took care of the ball, only turning the ball over 14 times all year. Derek Carr only threw six interceptions, and the team only fumbled seven times. The turnover ratio was +16, tied with the Kansas City Chiefs for the best in the NFL.

In 2017? Well that’s where the truth lies. Because after being the NFL’s best team in turnover differential last season, the Oakland Raiders are one of the worst this season. They’re 29th in the NFL at -9, ahead of only the Miami Dolphins, Denver Broncos, and Cleveland Browns.

As everyone knows, the Oakland Raiders have yet to grab their first interception this season. In fact, they’re the only team in the history of the NFL to play nine games without registering an interception. Hopefully that changes today against the Denver Broncos, but regardless, their inability to pick off quarterbacks has played a huge role.

Not only have the interceptions gone from top 10 to historically bad in a single season, but they haven’t forced anywhere near as many fumbles. They forced 14 fumbles last year, and they’ve only taken the ball away six this season. The defense simply haven’t been taking the ball away. Not only that, but they’ve been careless with the ball.

Last year, they barely gave the ball away. They only turned the ball over 15 times, and three of those came from Connor Cook in the season finale against the Denver Broncos. Carr threw six interceptions in all of last season and he’s already thrown eight in 10 games. Over the last three games, he’s thrown more interceptions than touchdowns, and he hasn’t had multiple scores since the dramatic win over the Kansas City Chiefs on Thursday Night Football, and with one more fumble, they’ll tie last year’s total.

The reality is that the Oakland Raiders are being careless with the ball and they’re not getting any breaks defensively. It’s true that they’re not the great team that they were in 2017, but they’re also just not getting the lucky breaks. Think of how close some of Oakland’s losses have been. Imagine if they hadn’t fumbled twice against the Buffalo Bills, or if they were able to get interceptions against the likes of Trevor Siemian or Joe Flacco. The season could be totally different.

The Silver (and Black) Lining

The Oakland Raiders are due. As crazy as it mind sound, the longer the team goes without an interception, the more likely they are to get one. Something’s gotta give, and nobody in the history of the league has made it this long without one. Today, they get Paxton Lynch, who might be the most inexperienced quarterback in the NFL, with both teams featuring new coordinators. If the Raiders can’t pick off Paxton Lynch, they might not be able to pick anyone off.